Maybe you have also wondered how much power do solar panels generate on a cloudy day compared to the clear sky? Other than the location on earth this is also a huge factor in overall performance.

I had the same questions myself.

So I tested my solar panel. I included my location on earth and time of the day when the test was carried out. For better visualization, I included also photos of the sky when measurements were taken. I also included cloudy sky testing. Not much scientific, but more of an example what can be produced on my latitude. Should probably compare to some online calculator to see how much I am off.

My solar panel and test setup

One year ago I built my first bigger DIY solar panel which should ideally deliver 65W. Today I cleaned it up and hooked up it up with car battery through solar controller cmtp02 and put a volt-ampere meter between controller and panel. There is also post showing how I tabbed solar cells together with self-made jig if interested.

Some results measured with my DIY solar panel

Here are the results with photos.

Time and place measurements were taken

When cloud moved over the sky- readings were following.

As expected, output decreased drastically, but still, this “ambient” light produces some electricity. With one panel in the array, it’s close to nothing. 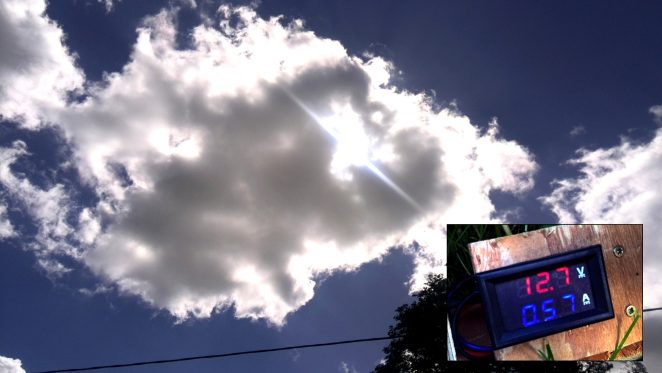 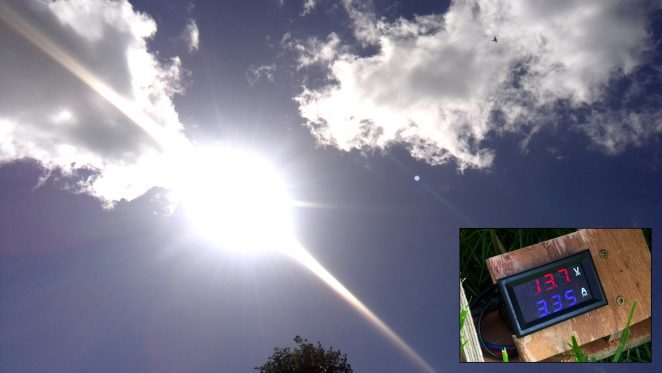 Another day month later. Almost rainy grey clouds that cover all the sky. Started rain after I made this test. Nice thick clouds covering the sky and the result was almost the same as when a bright day with a cloud covering. Maybe it’s because of the July – I don’t know. But I was still impressed by its efficiency. 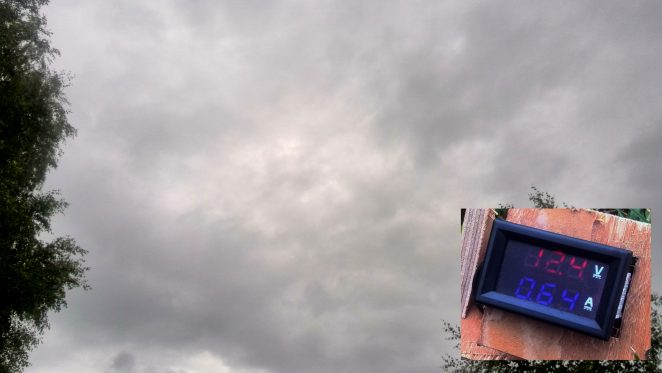 How much power do solar panels produce on a cloudy day?

From my solar panel, I saw ~84% decrease in performance on a cloudy day compared to the bright clear sky. In other words, the panel only produced~16% of its maximum power. It’s actually more I expected. It’s still a power I could harvest.

These numbers are also confirmed in here and here. They both agree that it should be 10% to 25%. So my calculations hit the middle mark. A quite accurate drop in power generation.

The conclusion of my solar panel testing

Overall- it produces 20W less power than “rated”. But I am not sure- is charging the battery the right load for this test. Maybe I’ll find something better in future to carry out this testing. But I’m pretty OK with these results also.